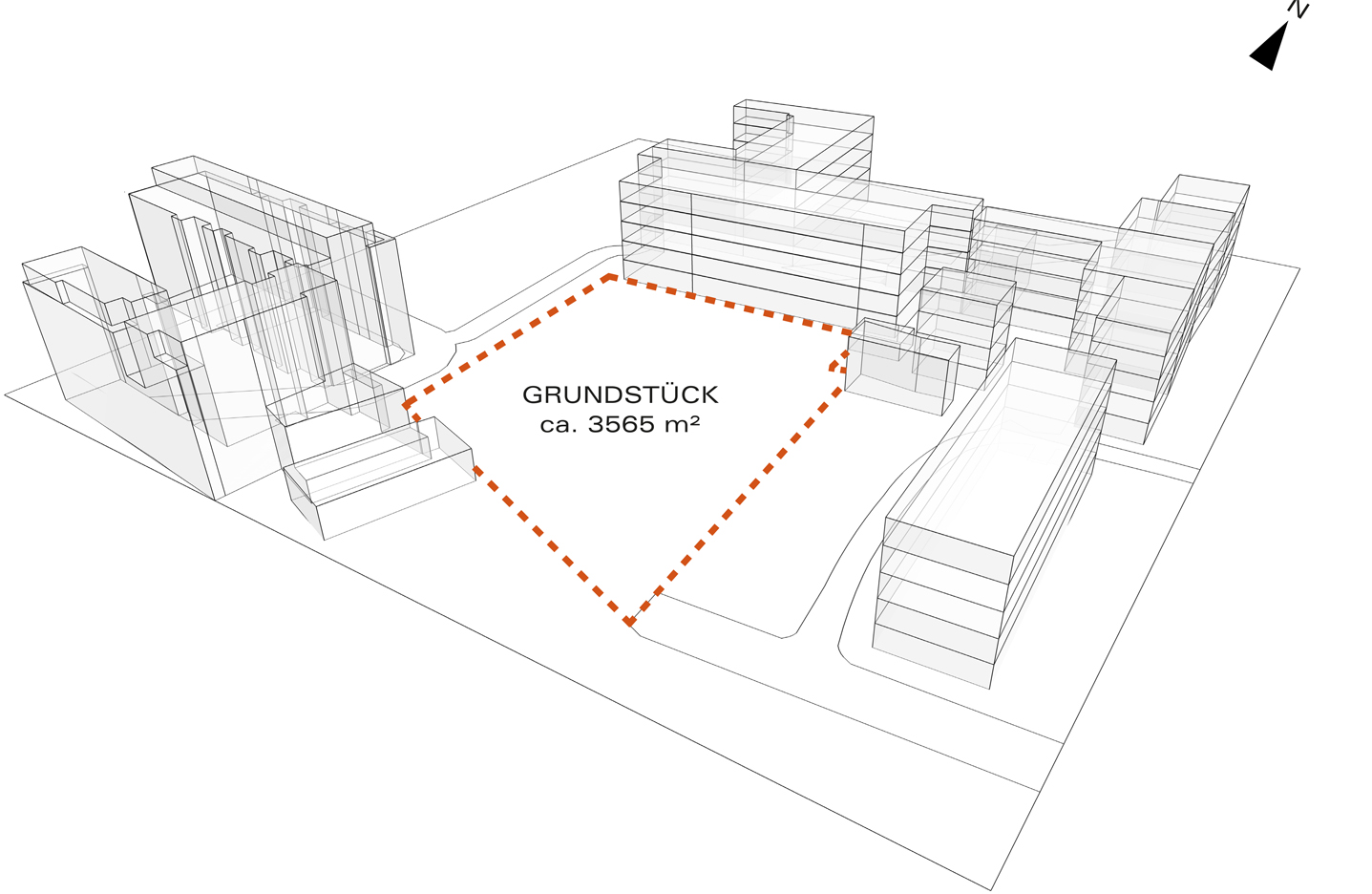 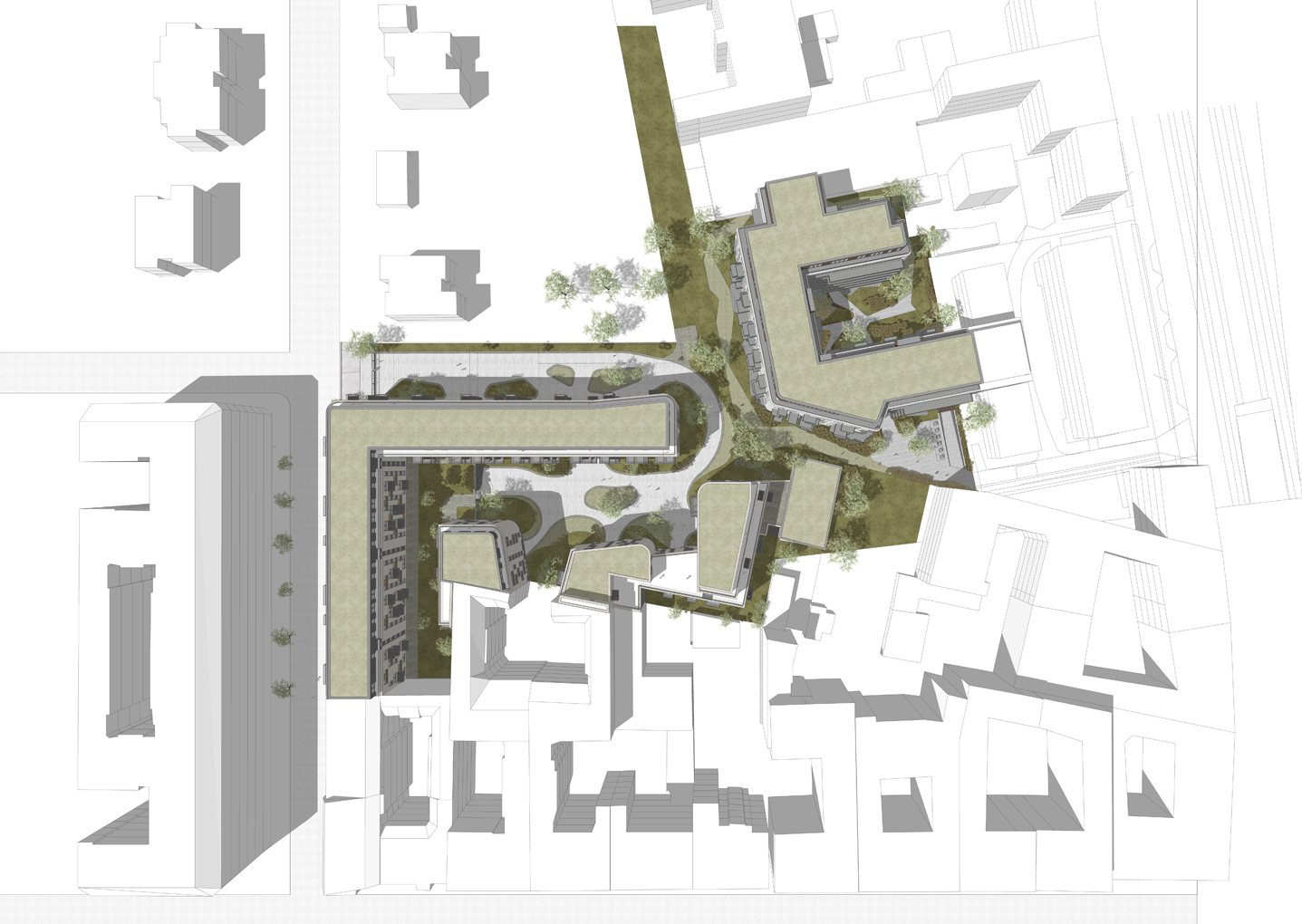 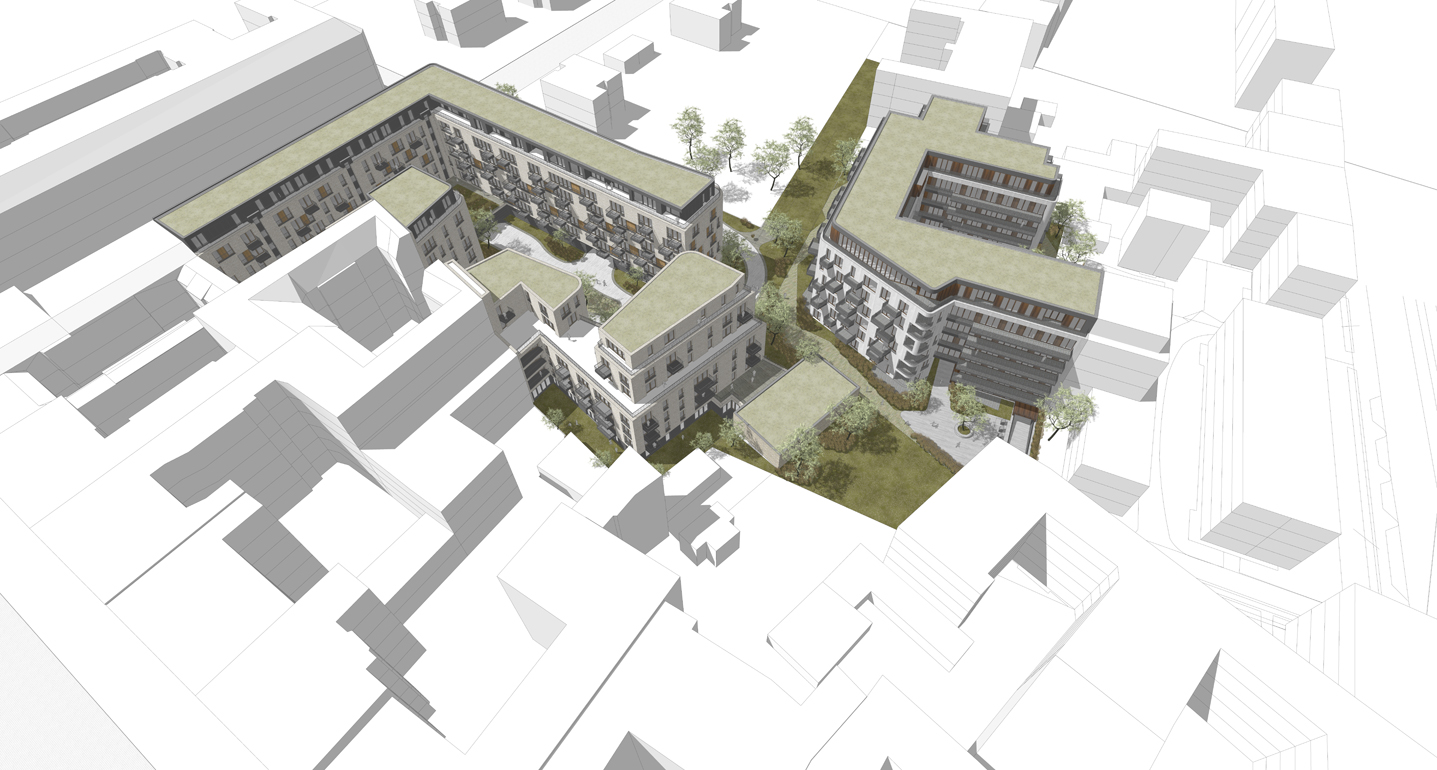 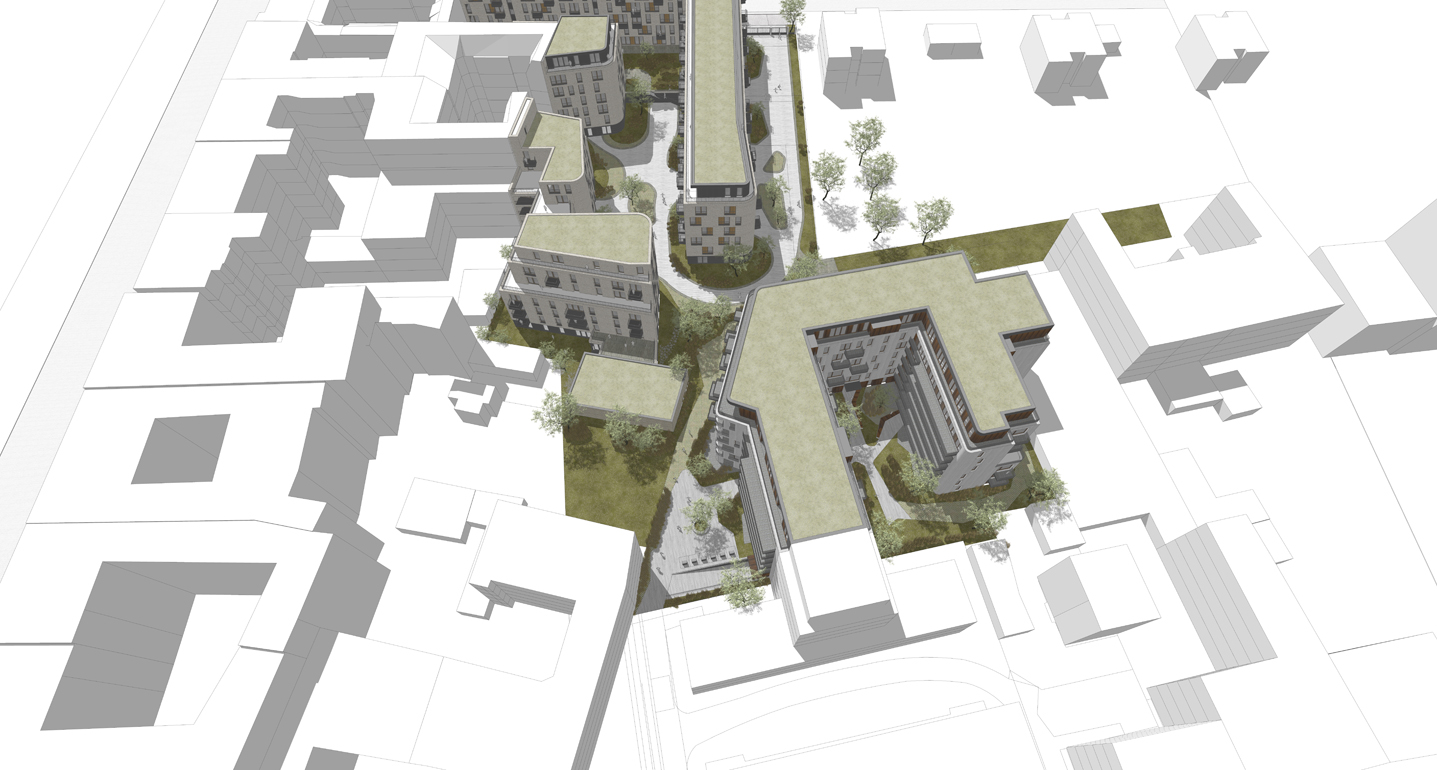 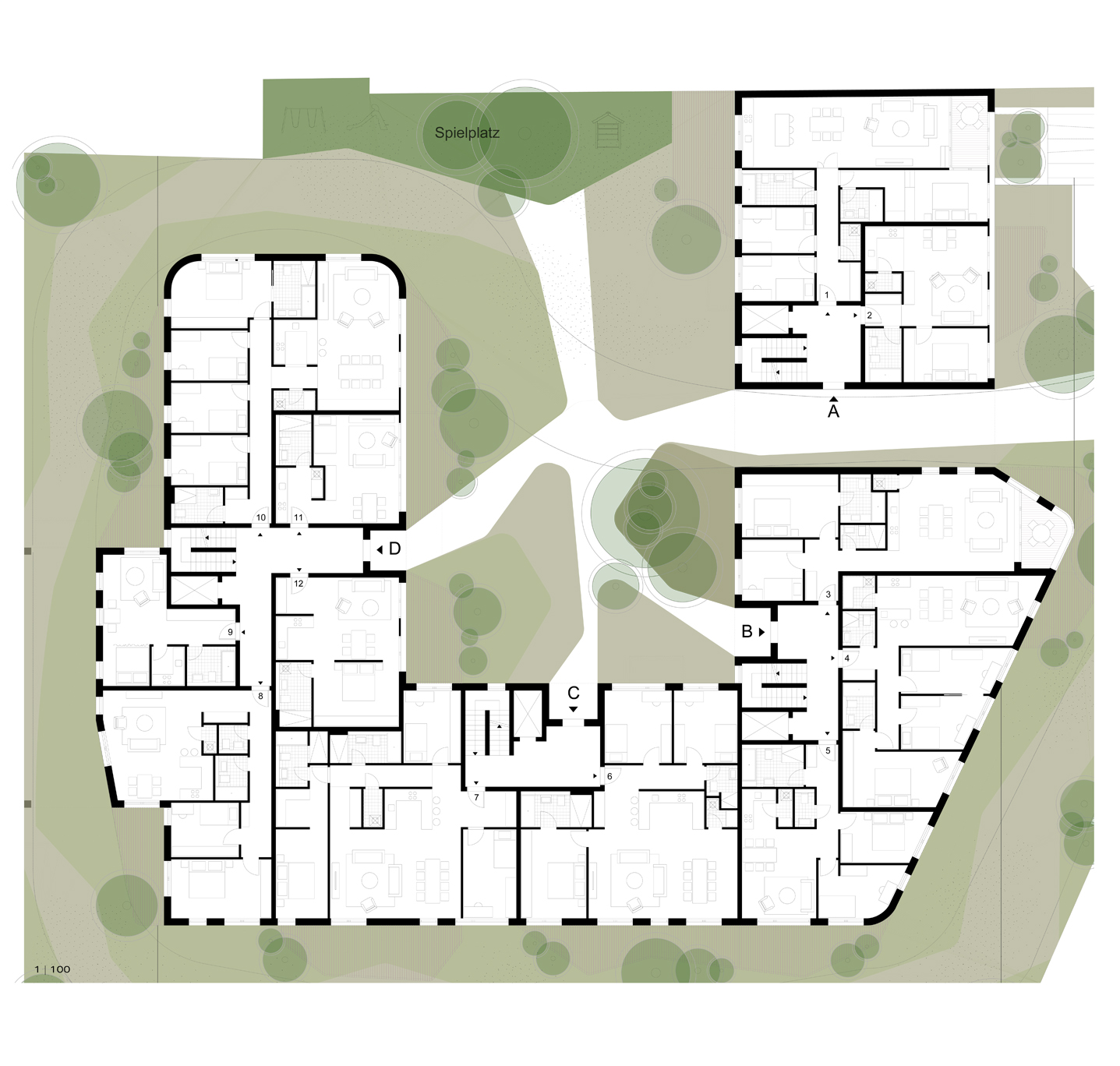 The planned residential complex fits snugly into a rear site in the transitional zone of diverging urban structures. The heterogeneous surroundings call for an explicit address generation with an expansive gesture.

The site is situated in a zone where dissimilar urban structures share a common border ­– the historically evolved city in the direction of Prenzlauer Berg, modern apartment tracts in the direction of Pankow. The parcel located in a courtyard is oriented to the former GDR embassy district, the block core and the new courtyard building of the adjoining Gotland quarter. It completes the block perimeter buildings that were destroyed in the War and creates low-density infill. The situation is somewhat different with the site on Berliner Strasse, whose development is to take place adjacent to modernized slab buildings. In order to create an inviting situation for the planned infill development in the block interior and to contribute to the upgrading of the area, it was necessary to design a forecourt from which the residents could reach their respective entrances through a passage. Gnädinger Architekten has responded to the special location with a specific design proposal. Contrary to the conception of city planners and developer, they envisage the removal of the slanting wing of the building to form an adequate entrance zone. In the interior the required setbacks are preserved, creating an inner-city block core with a high amenity value.

Formally, the “Pearl of the interior” with six levels and set-back storey orientates itself to the neighbouring Gotland and offers this neighbourhood an urban counterpart. The specific place at the interface of two urban structures calls for a temporary design that will appeal to the target group. The draft design meets the economic requirements with a series of measures. The masonry construction with a perforated façade and standardized timber window elements forms the basis for an efficient building envelope. The cleverly organized underground garage and a mix of well-conceived floor plans secure the economic viability of the residential complex, in which the ratio of gross floor area to leasable net usable space is >80 %.

Suspended balconies made of prefabricated concrete panels, recessed loggias and a carefully differentiated choice of materials ensure a high residential value. With a clear architectural language, Berliner Strasse in Pankow extends an invitation to experience urban living in the “backyard”.